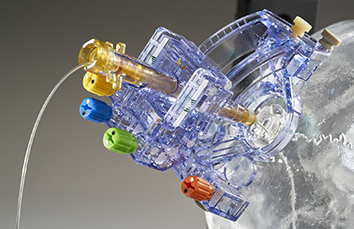 Mr. Burnett joined us as our Chief Executive Officer and President in November 2017. Prior to joining MRI Interventions, he served as Vice President and General Manager of Neuro Diagnostics and Therapy at Royal Philips, a publicly traded global health technology company, since March 2016. Prior to serving in such role, Mr. Burnett was the Senior Vice President and Business Leader of Image Guided Therapy Devices at Royal Philips and General Manager of Volcano Corporation (a Royal Philips company) from February 2015 to March 2016. Before Royal Philips' acquisition of Volcano in February 2015, he held various positions at Volcano from November 2004 to February 2015, most recently as Executive Vice President and General Manager of its Coronary & Systems Business Unit. Prior to joining Volcano, Mr. Burnett served as an R&D Engineer and Product Manager at Guidant Corporation from August 1999 to November 2004 and worked as a Bio-Medical Engineering Researcher at Duke University from May 1998 to May 1999. He holds an MBA from The Fuqua School of Business at Duke University and a B.S.E. degree in BioMedical Engineering from Duke University.

Mr. Piferi joined us in December 2006 as our Chief Operating Officer. Mr. Piferi has 30 years of industry experience in the areas of product development, manufacturing, quality and regulatory. Initially beginning his career in the aerospace industry, Mr. Piferi currently has over 20 years of experience in the medical device industry. Mr. Piferi has extensive medical device experience in various product lines, both implantable and disposable, including stents, catheters, guide wires, implantable cardiac support devices and neurosurgical devices. Mr. Piferi has been responsible for the development and commercialization of well over a dozen unique product platforms and the formation of over half a dozen medical device facilities, both in the U.S. and Internationally. Prior to joining MRI Interventions, Mr. Piferi served as the Vice President, Endovascular Technologies at Edwards Lifesciences Corporation, Vice President of Operations at Kriton Medical Inc. (currently Heartware International), Vice President of Operations at Orbus Medical Technologies, Inc. (currently Orbus Neich) and as Director of Advanced Engineering at Cordis Corporation, a Johnson and Johnson company. Mr. Piferi has a Bachelors of Science Degree from Central Connecticut University and an MBA from Rensselear Polytechnic Institute. Mr. Piferi currently has 6 issued U.S. patents, 18 U.S. patent applications and has co-authored several clinical publications.

Mr. Yelley joined MRI Interventions in January 2012 as Vice President, Operations. He has over 30 years of medical device experience in all areas of the business, including operations, manufacturing, engineering, quality and field support. Mr. Yelley possesses varied experiences in implantables, including stents and neuro coils, balloon catheters, neurovascular catheters and guidewires. Prior to joining the company, he served as Director of Operations/Engineering for ROX Medical, Director of Engineering for ev3/Covidien, Vice President of Operations at IntraLuminal Therapeutics and Vice President of Operations at Intravascular Research Limited. Mr. Yelley began his career with Medrad, then spent 12 years with ACS/Guidant in the engineering and operations area. He also possesses international experience, having spent three years in Europe during his tenure with Intravascular Research Limited. Mr. Yelley holds a BS degree in Chemical Engineering from Carnegie Mellon University and a MS degree in Manufacturing Management from Kettering University.

Ms. Keller joined MRI Interventions in November 2019 as Vice President, Marketing. She has worked in healthcare for over 20 years, building clinical research departments in radiology at Johns Hopkins University and Boston University before moving to the medical device industry where she held upstream and downstream marketing and market development roles for start-ups, mid-sized and multinational companies. Ms. Keller previously held global senior leadership positions at Volcano and at Royal Philips, post-Volcano acquisition, where she headed up KOL engagement and innovation in image-guided therapy for the interventional cardiology and peripheral vascular segments. Most recently, she served as Vice President, Sales and Marketing at Artemis Institute for Clinical Research, a network of sites conducting pharmaceutical trials for CNS and Internal Medicine indications. Ms. Keller holds a Bachelor of Arts degree from McGill University, and an MBA from the University of Maryland, College Park.